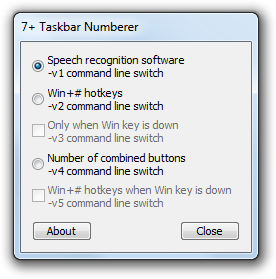 To launch this utility automatically when Windows launches and without showing the dialog, add a shortcut in your startup folder pointing to the location where you have placed the utility, followed by the -hidewnd command line switch, similar to:

You might also want to add the -hidetray command line switch to hide the tray icon.

To exit from this utility, right-click the tray icon.