Getting brighter colors in Windows 10

Note: Things work differently in newer Windows 10 versions, and this tool might not be relevant anymore. See this comment for more details. 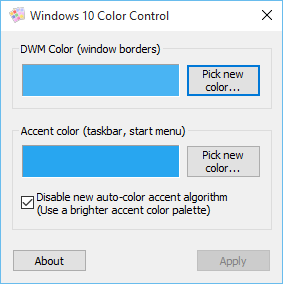 Windows 10 allows you to customize the taskbar and start menu colors, but it provides only a limited set of predefined colors. In addition, no matter which color you’ll pick, the taskbar will end up being dark. I searched, but haven’t found a straightforward way to have a bright taskbar on Windows 10. Fortunately, I have discovered that there’s an undocumented registry key which makes explorer use an alternative color calculation algorithm, which in turn produces brighter colors. You can see the difference in the example image above.

Article files (with the library included)

Alright, so what’s the use of the Multiline Ultimate Assembler Library? In my case it was useful as backend for a ‘generic’ API hooking tool. The tool was used to hook various APIs to prevent CRC checks and then the idea was to hook an API (VirtualProtect for example) that was accessed just before the OEP of the protected file was reached.
In our case we will not deal with a real protector, but just with a simple file that mimics a protector. Our protected file must have VirtualProtect in the import table.
END_OF_DOCUMENT_TOKEN_TO_BE_REPLACED

The stuff I’m going to release here is something I’ve worked on a year ago. Back then, v1.3.1 was the latest version of Icy Tower, and I’m sure that if I’d release it then, johanp would hate me as heck (remember how he reacted on Icy Tower Replay Editor?). But today, Icy Tower v1.3.1 is history. Also, IMO, Icy Tower is history in general (at least the desktop game, can’t tell anything about mobile/facebook as I don’t really know what these are). v1.4 mostly ruined the game – it became more static and ugly (no eye candy, images look stretched), harold’s got large ears and is not as cool as before, the game’s got lots of options, which makes it more complicated. Also, the official forum is not as active as it was before.
So, here it is…

This small console program does the following: loads a replay, checks it for validity (including the hash), and then silently plays the replay to verify it’s validity, just like the official itr checker.
So, what’s so special about it? It’s completely open source!
The replay file format, the hash calculation method, and the Icy Tower physics (in fact it’s whole engine) – these are available to look at from inside.
If you are familiar with graphics programming, you can easily turn this replay_checker to a replay_player, or even write an Icy Tower like game, which is capable of saving compatible replays 🙂

Sparse Floor
Only even floors are present (each second floor is there).

Solid Floor
You can’t go through the floors – they are solid.

Posted in Reverse Engineering on May 6th, 2009. No Comments.

Well, here is how you extract the program itself from the .u3p package for a regular use:
1. Download it here.
2. Use WinRAR or similar to extract the host folder from that file, which is in fact a zip archive.
3. Use the following command line parameters to use a local ini file instead of the registry for storing your settings:
winvnc.exe -runwithinifile .\winvnc.ini
vncviewer.exe -settingsfile .\vncviewer.ini

Now you can enjoy the portable version of TightVNC without a U3 drive.

But you must agree, that it’s not really handy to use a command line every time you want to run TightVNC. Well, I’ve patched winvnc.exe and vncviewer.exe and made them use an ini file by default. These are attached below.

Finally I want to advice you to make a donation to support the project.