Windhawk aims to make it easier to customize Windows programs. It allows installing and configuring mods (customization modules) with just a couple of clicks. For developers, it provides a convenient platform for developing and sharing such mods.

You can find more details, browse for the available mods and download Windhawk on the official website.

Read on for the motivation behind creating Windhawk. 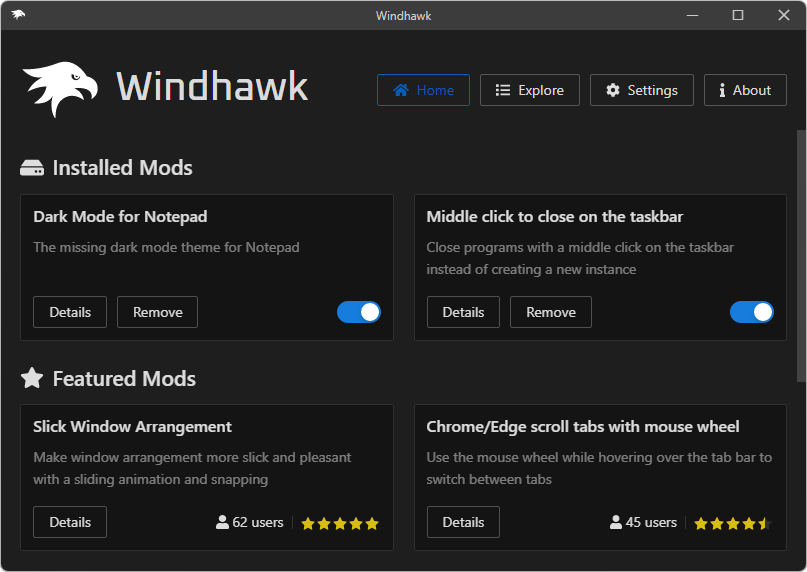 As a power user, I often find the need to customize the programs I use beyond the default settings. If I’m lucky, the relevant program provides options to customize it the way I need. If that’s not the case, I have several options:

Of course, some annoyances are less important than others. If that’s something I encounter rarely, e.g. if I can save a couple of clicks once a week, I’ll most probably choose the first option as it’s not worth the time. If that’s a very minor annoyance, I will probably live with it too. But if that’s something I encounter regularly and it’s annoying enough, I might start looking for a solution.

Finding or creating a helper program that fills the gap is sometimes an option. For example, AutoHotkey can be used to overcome some annoyances (e.g. it can make the target program think as if you’re holding the Shift key). Another example is the X-Mouse Button Control tool which can help customizing mouse behavior for any program. I can also create a helper program from scratch, I’ve done this on several occasions. But there are many cases in which these approaches don’t work.

If none of the above works, what I’m left with is modifying the relevant program to fix an annoyance or add new functionality.

So, I have a Windows program which I’d like to modify to better fit my needs. What are my options?

If the program is open-source, the best option is to implement the improvement and contribute it to the project. This way, all users can benefit from it, including myself, and that’s where my journey happily ends. But my contribution might be rejected, e.g. because it’s very specific for my needs or for any other reason. In this case, I can choose to fork the program, but if the program is updated regularly, maintaining a fork and keeping it updated can be a hassle.

If the program is not open-source, I can modify the compiled executable of the program, usually the .exe file (as long as it’s legal, of course). That’s a more challenging task and the details are out of scope for this post. I’ll just focus on two ways to apply such a modification:

Both options are valid, but modifying the file on disk has several drawbacks:

Given the above, modifying a running instance of the target program in memory is usually a better, safer and more robust solution.

Modifying a running instance of a program in memory

There are many possible use cases for modifying a running instance of a program in memory. It can be done for a minor customization or for adding a significant missing feature. It can be required because the target program is no longer developed, because the developer refuses to add a feature or fix a bug, or for other reasons. In fact, the most popular program on this website, 7+ Taskbar Tweaker, is a great example – it adds extra features and fixes bugs in the Windows taskbar, features and bugs which Microsoft is not willing to implement or fix, and which many users find useful.

One of the challenges in implementing such a customization is that apart from the customization itself, the developer has to take care of things such as process injection, function hooking, symbol loading, creating a user interface, and more. The extra effort required for even a simple customization means that sometimes it’s not worth the effort for a developer to invest the time and improve the experience for himself and other users. At other times, the developer can take a shortcut, such as patching the file, solving the problem for himself but not having an easy way to share his work with other users.

Another benefit for users is that every mod is just a single file of textual code. This makes it easier to review what the mod really does, unlike with an executable file which is very difficult to verify. And that doesn’t come at the expense of user experience – installing a mod takes a couple of clicks, unlike compiling an open source project which requires time, programming tools, and usually some programming skills. Also, it’s easy for a user without programming skills to make minor edits to existing mods, such as changing texts or tweaking simple calculations. A mod can even be shared via a service such as Pastebin.

Below are examples of projects or customizations which could use Windhawk.

As mentioned earlier, 7+ Taskbar Tweaker, the taskbar customization tool for Windows, is the most popular tool among the tools you can find on this website. You might wonder what are the pros and cons of both tools, since customizations can be developed and shared in both, and how Windhawk affects the future of 7+ Taskbar Tweaker.

Regarding pros and cons, here’s a quick summary:

As you can see, for a user, both solutions are quite similar as long as both provide the same customizations. Windhawk makes it easy for developers to create such customizations, and unlike with 7+ Taskbar Tweaker, anyone can contribute customizations, which means users will have more possibilities to customize their programs the way they want it.

Regarding the future of 7+ Taskbar Tweaker: It will keep existing as a separate program which supports Windows 7 to Windows 10. As mentioned in a recent blog post, most parts of the taskbar were reimplemented in Windows 11, and 7+ Taskbar Tweaker can’t be made to work with the new taskbar without a huge amount of work. My plan, at least in the short term, is to implement the most demanded customizations for Windows 11 as Windhawk mods. A couple of mods are already available, take a look. A more detailed blog post about Windows 11 taskbar customization and Windhawk will be published soon.

I hope that Windhawk will fulfill its vision in helping users gain control over their device. Go download Windhawk on the official website and share your experience. I’d love to hear your feedback about Windhawk, both from users and from developers.

59 Responses to “Windhawk, the customization marketplace for Windows programs”