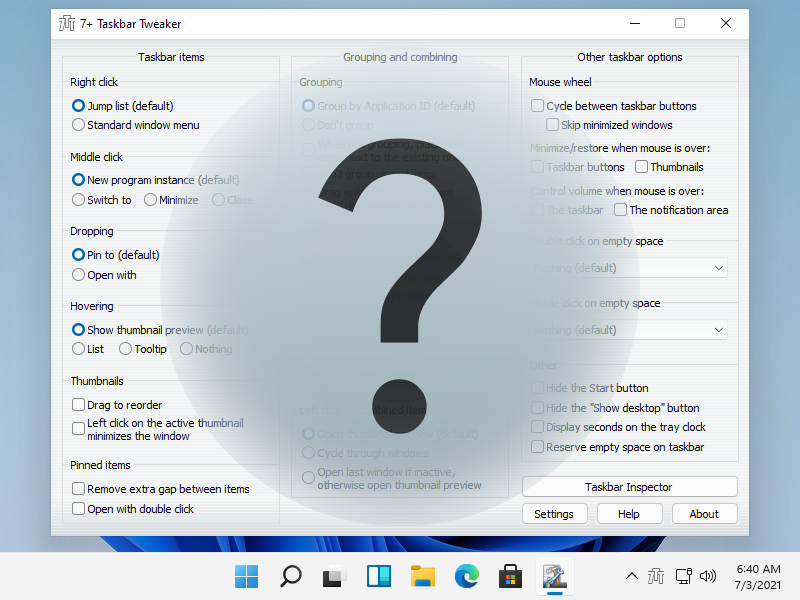 About a week ago, on June 24, Microsoft officially announced the next version of Windows, Windows 11, the successor to Windows 10 which was released in 2015. Among the new features of Windows 11 is the redesigned interface throughout the operating system, which also affects the taskbar. As with previous releases of new Windows versions, Windows 11 breaks compatibility with 7+ Taskbar Tweaker, and even though Windows 11 wasn’t released yet and the first Insider Preview build was just released this week, users started to ask about compatibility of the tweaker with the new Windows version. I spent some time this weekend looking at the taskbar of Windows 11, and below are my findings.

Even though the taskbar of Windows 11 looks fairly similar to the taskbar of Windows 10, just centered and with different colors and animations, the implementation of the visual part of the taskbar is completely new, written from scratch using a new technology called XAML Islands (documentation, code samples). The XAML Islands feature, available since Windows 10 version 1903, allows non-UWP desktop apps to host UWP (Universal Windows Platform) controls, allowing to gradually modernize existing native apps without having to rewrite them completely.

In the image below I marked in red the parts of the taskbar which were reimplemented in Windows 11 using UWP controls, and in green – the parts that weren’t. As you can see, only the non-system part of the notification area and the thumbnail preview still use the same technology as they did in earlier Windows versions, and I suspect that the thumbnail preview window might be migrated in the near future to get a UI with rounded corners like the other parts of the new taskbar.

Also, I marked in red the tweaker’s options that have to be reimplemented from scratch, either because they depend on built-in functionality that is no longer available, or because they rely on implementation details that were completely replaced with a new implementation. The options that are not marked in red might have a chance to be tweaked to work with the new taskbar, but that requires more research, and might still require a large amount of work.

One example for removed functionality is the “Never group” option which shows each window as an individual, labeled button, and never combines them. The tweaker provides flexible options for controlling combining and labels which are not available in Windows out of the box, but to achieve that it uses the existing functionality. In Windows 11, this is no longer possible.

An example for an option that is not marked in red that I briefly looked at is the “Don’t group” option. That’s probably the most popular option of the tweaker, and it has existed since version 1.0 which was released in 2009. Its implementation is rather simple, and I even blogged about it back in 2013 (in Russian, here’s an English translation via Google Translate). Now, with the new taskbar, this simple implementation is no longer enough, probably due to new assumptions that were added to the new code, causing side effects and instability:

You’re probably wondering what’s going to happen with 7+ Taskbar Tweaker as a result of these changes in Windows 11. I see three options going forward:

I’ll do my best to go with option 1 or 2, not 3. I need to get more familiar with the new technology and implementation, and I also want to wait and see whether new customization options are added to the new taskbar in newer builds. For now, I lean towards option 2, but I don’t promise feature parity, and currently I can’t tell when I’ll have something to show.

Leave a Reply to Ala