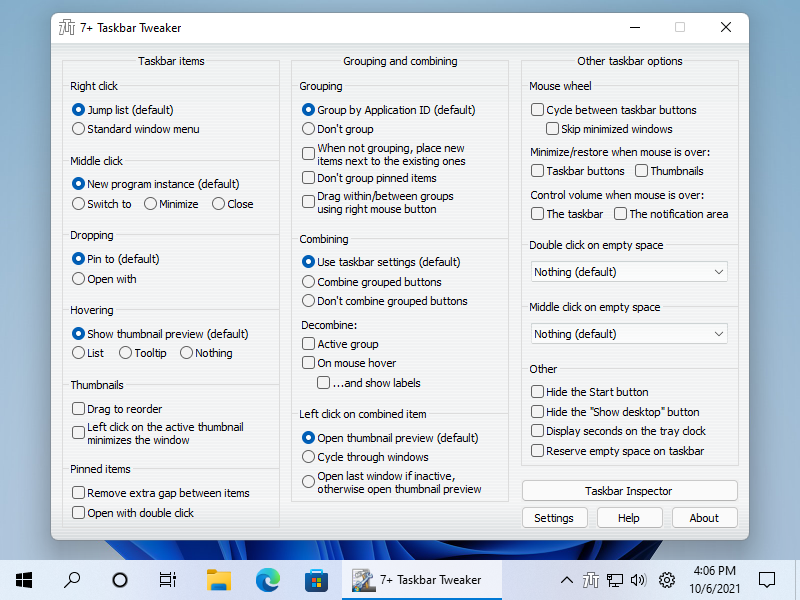 Getting back the old taskbar in Windows 11

Let’s start with the good news. Even though Microsoft reimplemented the new Windows 11 taskbar from scratch as was mentioned in the previous blog post, the old taskbar code was left beside the new one, and there are several ways to activate it. Here is a great summary of the options by Gaurav, but I’ll just mention the steps that worked for me:

Regarding the new taskbar in Windows 11

As I mentioned at the beginning of this post, 7+ Taskbar Tweaker will probably never be compatible with the new Windows 11 taskbar. It took a lot of time and effort to implement all of the functionality for the old taskbar, and since most of it has to be reimplemented from scratch, it’s not feasible to have a tool with a similar set of functionality in the short term. At the beginning it will only contain a small subset of the old options. Also, I might end up adding new tweaks which are only relevant for the new taskbar. With all this in mind, it makes sense to start fresh.

I played with the new taskbar a bit, and there are two scopes for possible tweaks:

My plan is to start with non-UI tweaks, and at the same time explore the new UI at my spare time. I’ll try to prioritize the tweaks according to the users’ demand, ease of implementation, and my own interest.

Leave a Reply to Vendy